Craig Cesal and daughter Lauren posing OUTSIDE the entrance to FCI Terre Haute, where he was just released to home confinement.

I am beyond THRILLED to be able to announce that Craig Cesal, a nonviolent first time offender sentenced to Life Without Parole for a Marijuana conspiracy offense, was FINALLY allowed to go to home confinement today, due to dangers posed by the Coronavirus.  His daughter Lauren picked him up this morning (see happy photo above).

Those who have been following Craig’s story on the Facebook page I created and have long managed for him, know that the 61 year old diabetic with lung issues was approved by the national and regional Bureau of Prisons offices to be released to home confinement in light of the risks posed by Covid 19 on the federal prison population.

However, the warden at FCI Terre Haute subsequently blocked this order.  (The reasons why he might do this are outlined in the emails Craig sent to me over the last year involving systemic staff on inmate abuse and violence at FCI Terre Haute.)

Craig’s army of supporters flew into action and made countless calls and sent tons of emails to prison and justice department officials, including a concerted effort of emails aimed at Attorney General William Barr, who first ordered the Bureau of Prisons to send nonviolent offenders to home confinement.

Despite Craig qualifying as per Attorney General Barr’s guidelines, and despite him having a safe and stable place to live with his beloved daughter Lauren, it looked like Craig’s chances of going home were blocked.  The outrage over the warden’s actions was reported about in this terrific profile by Beard Brother’s Media.

But then, suddenly, something changed. Out of all the prisoners at FCI Terre Haute, Craig was told his case had been “reconsidered.” He would be allowed to go to home confinement after all.

Sorry for the Secret

Craig informed me and his daughter of the happy development nearly a month ago.  However, knowing how things can and do change within the prison bureaucracy, we all thought it best to keep quiet until we knew 100% for sure that this time, it was for real.

Craig’s family, friends, and supporters have had many reasons over the years to feel hopeful, only to have those hopes dashed, and he did not want to put them through that again.

I have to confess, keeping this a secret for the last month or so has been TOUGH.  Craig too, emailed me early on saying “it’s killing me not to be able to tell people."

But he was adamant that we had to know that it was for real before we said anything.

Soon after getting the news, Lauren Cesal, who lost her father to federal prison back in 2002 while she was a young teenager,  expressed her fear to me of the “rug being pulled out from under them” again.  And her fears were not without reason.  But this time, they turned out to be unfounded.  FINALLY.

The last 2 weeks before his release were especially difficult as Craig was in a mandatory quarantine at the prison, where one inmate has already died of Covid 19, before being allowed to go home.  That meant he was not able to communicate with Lauren or myself at all. Up until then there had been a steady stream of excited messages optimistic about the future.

Today I am happy to report that Craig and his daughter are reunited.  She picked him at FCI Terre Haute this morning and they are on their way home. 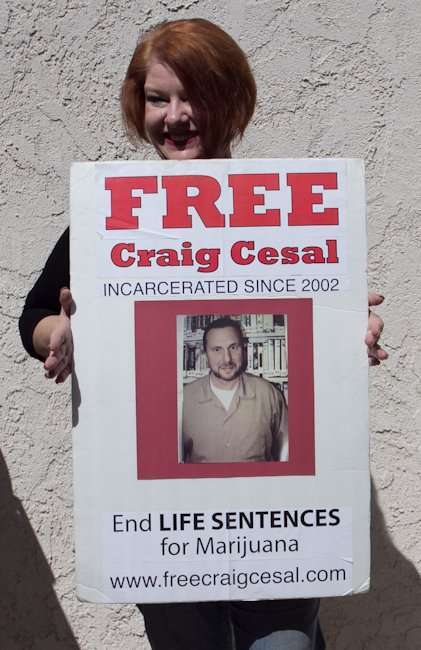 As a long time activist for marijuana prisoners, especially those with life sentences, it does not get any better than this.  I cried tears of joy when Craig first gave me the news and more today.

For me, Craig’ Cesal's release is very personal.  That’s because Craig was one of the first prisoners I started working with when I first began my activism for this cause.

Over the years he has become a friend.  He has been through a lot through those years, including the tragic death of his son Curtis, several serious health crises, numerous cases of prison abuse, not to mention long and hard fought efforts to gain clemency.

Those have yet to materialize but we are hopeful they someday will. Even though he has been allowed to go to home confinement, it is important to note that Craig’s sentence has not changed in any way. The only thing that has changed is where he is serving it.  The Bureau of Prisons could choose to send him back to prison at any time and for any reason.  A Change.org petition asking for a sentence commutation is still active.  Sign that here.

But for now, serving his sentence at home with his loving daughter by his side is already a massive improvement, not to mention a reason to celebrate.

Through the years that I have been working him, Craig’s story inspired more and more supporters who were outraged at the injustice of a first time offender, who did nothing more than repair trucks that had previously hauled marijuana, being sentenced to life in prison.

Those people, who diligently followed his page, who read his actual emails to me about what was really going in the federal prison that was his home, are who Craig credits for keeping him safe during all the madness.  Their efforts and their voices are also what ultimately brought him home.

I know that Craig and his family are profoundly grateful for everyone’s efforts.  As am I.

Welcome back to the real world Craig Cesal.  At least partially back.  I wish you much luck, love, and happiness.  You deserve it.

UPDATE: Craig's daughter Lauren has started a ​Go Fund Me campaign to help her dad get back on his feet and get some much needed medical care that had been neglected in prison.   If you would like to donate, you can find that here.

Own a Piece of Cannabis History While Helping Marijuana Prisoners

Own a Piece of Cannabis History While Helping Marijuana Prisoners

Read More
How Can Someone Get a Life Sentence for Marijuana? Is Life for Pot Even Possible?