Guest Post by Robyn Griggs Lawrence
Excerpted from her book Pot in Pans: A History of Eating Cannabis (2019, Rowan Littlefield's Studies in Food and Gastronomy Series)

Archeologists believe a group of Aryan warrior-nomads brought cannabis to South Asia during a series of invasions between 2000 and 1000 BC, and it became a critical part of the culture, used in religious rituals and festivals, ingested as medicine, and enjoyed recreationally – though in very different forms – by people from all castes.

Ancient Sanskrit poems celebrate cannabis as one of five kingdoms of herbs that release people from anxiety, and the Hindu scripture Bhagavad-Gita sings its praises, saying cannabis can sharpen memory and alleviate fatigue.

Siddhartha, the wealthy young prince who sat under a Bodhi tree for six years preparing for spiritual enlightenment, was said to eat nothing but a single cannabis seed per day during his incubation to become the Buddha.

The Atharva Veda, a Hindu scripture written between 2000 and 1400 BC, referred to cannabis as an ingredient in an intoxicating drink called “soma,” and ancient Hindu poetry is filled with references to how Lord Shiva, one of three gods responsible for creating, maintaining, and destroying the world, loved cannabis so much that he brought the plant from the Himalayas as his gift to humankind.

The earliest Ayurvedic medicine practitioners were convinced cannabis could soothe the fevers that plagued humankind, which Lord Shiva was said to have blown from his nostrils during a fit of anger at his father-in-law, Prajapati, the king of all men. (Later on in the mythical tales, Lord Shiva killed Daksha.) Ancient Indians called cannabis viiaya, which in the Sanskrit language meant victorious, and it was widely believed that Lord Shiva gave it to humans as a gift because he was concerned about the welfare of all people.

Though cannabis use was widespread throughout India, methods of consuming it were very different and determined, as was most everything in the culture, by the caste system that divides Hindu society into hereditary classes.

The higher castes made the leaves and flowers into a paste known as bhang, which was usually combined with spices, seeds, nuts, and milk to make a creamy drink called Bhang ki Thandai (a name generally shortened to bhang) and was consumed during religious rites and celebrations.

Throughout the centuries, Indian writers have waxed poetic about the many benefits of bhang, which they have described as an exhilarating substance that stimulated conversation, eager thought, and poetic imagination; induced sleep and sexual desire; increased fertility; and cured diseases.

The celebratory beverage was traditionally prepared by pounding and mixing the leaves with water to form a thick paste, which was then rolled into a ball and allowed to dry. The dried paste was then mixed with milk to solubilize the fat-soluble THC, strained through a cloth, mixed with more milk or water and flavored with sugar, spices such as cardamom and ginger, and sometimes melon seeds.

Throughout India, use of cannabis and public approval or disapproval of its consumption varied, nearly always based on caste position. The elite castes in Madras consumed a lot of bhang, while the laboring poor in Hyderabad and fakirs (religious ascetics) in Delhi, who couldn’t afford bhang, made do with ganja, which was prepared from the flowering tops of cultivated female cannabis plants.

Harvard Medical School psychiatrist and cannabis researcher Lester Grinspoon likened the difference between ganja and bhang to the variation between beer, the drink of commoners, and fine single-malt scotch, a liquor for elites.

Sometimes lower-caste Hindus pressed sticky cannabis resin into balls or wafers known as charas, which was sold in measurements known as “fingers” and smoked in small pipes called chillums.

Charas, because it was made from pure resin – which is where most of the THC is concentrated – was more psychoactively potent than bhang. It was also mixed with alcohol, perfumed syrups, and rose, jasmine or orange water to make exotic potions, and charas was a key ingredient in majoun (also spelled majoon), sweetmeats that were made from sesame seed oil, cocoa butter, spices, powdered chocolate, almonds, walnuts, pistachios, cinnamon, cloves, vanilla, musk, nutmeg, and belladonna berries – confections that would become an enduring and important part of cannabis cultures around the world for centuries to come.

In India, majoon recipes varied from region to region and family to family, but nearly every family had one, and they were often closely guarded. Poppy seeds were often included, and sometimes so was Datura, a leafy herb that causes uncomfortable and unpleasant effects including hallucinations, motor control loss, muscle spasms, and difficulty breathing.

It was this powerful deliriant, not cannabis, that likely caused the extreme reactions to majoon that would tarnish the reputation of cannabis and hashish and be used as powerful propaganda against the plant for centuries.

Robyn Griggs Lawrence is the author of the bestselling Cannabis Kitchen Cookbook and a contributing editor for Sensi magazine. She is currently a digital nomad, traveling the country in her Airstream.  Visit Robyn's website. 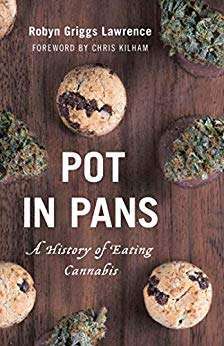 Is the 710 Stoner Holiday the New 420? Celebrating the Cannabis Lifestyle

Read More
Why You Should Avoid Making Glycerin Tinctures