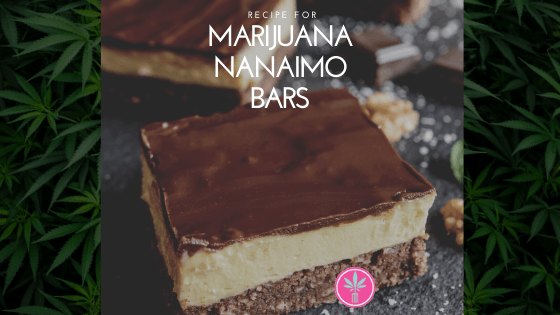 This B.C. specialty (from Nanaimo, a suburb of Vancouver), was made to be medicated!

These layered bars made their debut in a 1950s cookbook from the Vancouver Island city of Nanaimo.  They’ve been growing in popularity ever since.  My first encounter with them was back in the 80s when I made my living as a circus and variety arts performer.  A producer I worked a lot for at the time had several dates a year booked at a small Vancouver theater near (but not in) Nanaimo.  Near was close enough for every coffee shop to have stocks of the sweet treats offered in the vicinity of the checkout register.

My friends and I quickly learned that different cooks had their own variations on the legendary local dessert and the quality could vary substantially from purveyor to purveyor. I hope my medicated version passes muster.  My recipe testers thought it did and then some!

A note about the Dosing on this recipe!

This recipe will have about 15 mg THC per bar IF you made your marijuana butter from average cannabis (10% THC) and used 1/2 ounce of marijuana to make 1 cup butter.  To adjust the dosage for your personal needs and to reflect the strength of the marijuana you are cooking with and the amounts you used to make your butter, be sure to take my FREE 10 minute online Dosing Class.

This dose is only a suggestion.  Be sure to read and understand Calculating Cannabis Doses in Edibles before attempting to cook with marijuana.  To learn how to PRECISELY dose this and other recipes, take my FREE online dosing class (takes just 10 minutes).

Keyword bar cookies, Marijuana Nanaimo Bars, Nanaimo bars
Tried this recipe?Let us know how it was!