What's New...
You are at:Home»Lifestyle»Entertainment»Tokin’ Women: A 4000-Year Herstory of Women and Marijuana 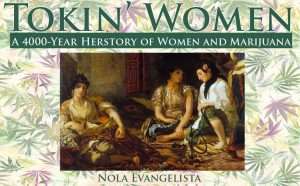 Perhaps I notice it more as I am the author of a book about women and marijuana (Mary Jane: The Complete Marijuana Handbook for Women, 2015 Seal Press), but the topic of women and marijuana has been garnering tons of media attention over the last couple of years. Media hype aside, the phenomenon is hardly new. Turns out women have been maintaining significant relationships with Mary Jane all along. If you need proof, just turn to this fascinating little book that features entertaining snapshots of famous and infamous female cannabis aficionados throughout history.

Penned by herstorian Nola Evangelista, AKA Ellen Komp, (deputy director of California NORML), Tokin’ Women introduces readers to 50 fascinating influential females, both mythical and actual. Subjects range from ancient goddesses who brought the sacred herb to the mortal masses; to stars and starlets whose careers and lives were destroyed by reefer madness; to brave pioneering women, then and now, who always had the courage to rebel against society’s rules and stigmas about cannabis.

The book contains a lot of star power, covering luminaries like Elizabeth Taylor, Barbra Streisand, Miley Cyrus, Sarah Silverman, and other A-list celebrities. For me though, the stories of some of the lesser-known figures proved the most compelling. In today’s culture, tales of adventurous female explorers, pioneers in art, science, and literature, and other powerful women who lived their lives according to their own rules are too often over shadowed by the glitz of celebrity. But Evangelista gives plenty of ink to both. This book has prompted me, as I am sure it will others, to check out some of the cited source materials for more in depth biographies of some of these inspiring, freethinking women.

Each short profile is confined to a single page, yet Evangelista still manages to weave the greater overall history of cannabis and hemp use into the women’s narratives. For instance, the entry on Queen Victoria gives a snapshot of women using cannabis during pregnancy from ancient times to the present; and the pages on Mary Todd Lincoln give us an overview of hemp production in Kentucky and in the USA in general, along with Mrs. Lincoln’s personal connections to the plant.

With both laws and stigmas surrounding marijuana use loosening, women are coming out of the cannabis closet like never before. Tokin’ Women shows they are in very good company.