Marijuana Terpenes: What They Are, Why You Need Them, How To Use Them

Over 140 terpenes have been identified in cannabis and besides giving each marijuana strain its unique aroma and flavor, these organic hydrocarbons also play an important role in how a given strain makes you feel and the health-giving qualities of the plant.

Terpenes interact with cannabinoids and are integral to what scientists call “the entourage effect” of whole plant medicine.  This essentially means that the sum of the cannabis plant's parts is greater than any individual cannabinoid (such as CBD or THC) or terpene.  The power of the entourage effect is one reason why I personally favor whole plant medicine and use it in making my edibles and topicals.

That said, this is another area of cannabis research still in its infancy and we have a lot to learn about how terpenes and cannabinoids interact to provide medical benefits.

Forget About Indica and Sativa: How Terpenes Affect Your Cannabis

As research into cannabis and terpenes progresses, it is changing a lot of what we used to think we knew about marijuana.

But science and research have now found that the cannabinoid and terpene profiles of any given strain are what actually causes its effects and are likewise better predictors of what to expect from a given strain.

Each cannabis strain has a unique combination of terpenes and cannabinoids, not to mention compounds called flavonoids that we know even less about.  It is that combination in any given strain makes us feel the way we do.

For practical purposes terpenes have three big effects on the cannabis you consume:

Terpenes versus Terpenoids What’s the Difference?

These two terms are increasingly used interchangeably, but there is a difference between the two, although it’s technical and a little wonky.

Generally speaking, think of a terpenoid as a slightly altered terpene.  A terpene is a hydrocarbon, whereas a terpenoid has been denatured by oxidation such as what occurs when marijuana flowers are dried and cured. The term terpenoid also refers to terpene derivatives or terpene-like substances.

Why are companies making and bottling terpene extracts without cannabis?

The cannabis industry is getting quite sophisticated with terpenes and extract artists are using them to craft specific blends when making cannabis concentrates.

In broad strokes how this works is that sophisticated lab equipment isolates out the individual cannabinoids and terpenes.  This allows the extract artist to then add them back in specific quantities.

It is all meticulous and scientific and many experts predict this is the future of medical marijuana as not only can blends be made to treat specific symptoms, the company can produce the exact same results, batch after batch after batch.

Terpenes in the Cannabis Kitchen 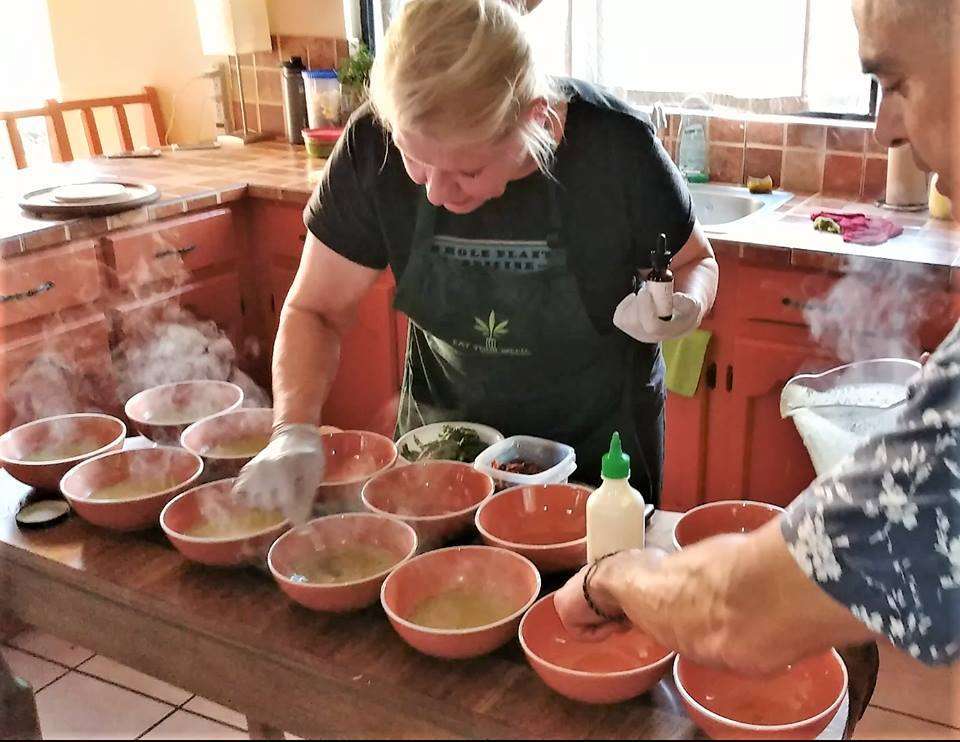 The aromas and flavors of cannabis in cooking can be a help or a hindrance.  In most cases, cooks try to make them less prominent as most people don’t really like the flavor of cannabis in their food.  I talk more about this in this article and in my online cannabis cooking course.

Chefs have long used terpenes derived from other plants, in the form of edible essential oils, for their intense but all-natural flavors.  Likewise, it was only natural for culinary professionals entering the cannabis arena to take advantage of these important compounds in the cannabis plant as well.

While the main goal with making edibles used to be to hide the flavor of cannabis, innovative chefs are now doing just the opposite and incorporating the plant into their recipes by carefully choosing strains based upon their dominant terpenes.   This elevates the role cannabis in food beyond a vehicle to carry a medicated dose and into the realm of haute cuisine.

Is it required you match terpenes to other ingredients when cooking with cannabis?  Absolutely not.  This is a more advanced technique and you can certainly make fine marijuana edibles without it.  But if you are ready to take your cannabis cooking game up a notch, consider matching the terpenes in your cannabis to the ingredients in your food.

Of course the process is delicate and tricky as different terpenes burn off at different temperatures.  For this reason, for maximum terpene benefit, smoking or vaping are preferable to cooking.

Choosing cooking (or smoking) material according to terpenes can help medical marijuana patients get better symptom relief.  As we know the effects of various terpenes, it only makes sense that cooking with or smoking strains high in those terpenes could provide additional symptom relief.  For instance, a strain high in linalool which is sedative will likely be better for bedtime edibles than a strain high in limonene which is energizing.

To put this into practice, look for terpenes that help the symptoms you are seeking relief from, such as insomnia, pain relief, or inflammation and then shop for strains high in those particular terpenes.

I created a free handy Terpene Cheat Sheet you can download and take with you when shopping so that you can make better strain choices, or keep with you in the kitchen so you can make better flavor pairings.  It covers the 14 most common terpenes, their medicinal effects, strains they are typically found in, food pairings and more.

Terpenes are responsible for most of cannabis’s effects.  My FREE Terpene cheat sheet helps you make better strain choices so you get the relief and effects you want.

To download my FREE terpene cheat sheet, enter your email address below.

We never spam - opt out anytime