You might be surprised to learn that replacing NSAIDs with cannabis for pain relief provides a much safer way to manage pain.

Non-steroidal anti-inflammatory drugs (NSAIDs) are used daily by over 17 million Americans to treat headaches, arthritis, sports injuries, menstrual cramps and a litany of other debilitating ailments. The two most commonly used NSAIDs are aspirin and ibuprofen with such familiar brand names as Bayer, Motrin, Excedrin, and Advil. Celecoxib and naproxen are lesser-known classes of NSAIDs but they also have recognizable brand names such as Aleve, Naproxin, Naprosyn and Celebrex.

Non-aspirin NSAIDs, developed to provide pain relief without the negative consequences of aspirin’s gastro-intestinal complications, became widely available in the 1980s. Over 111 million prescriptions are written in the United States every year for non-aspirin NSAIDs and account for almost 60 percent of all over-the-counter pain medications.

Although considered "safe," non-aspirin NSAIDs labels warned of nausea, vomiting, diarrhea, constipation, kidney failure, ulcers and that they “may” cause heart attacks. Underscoring the seriousness of these warnings, an article published in the November 2013 online issue of the American Journal of Managed Care reported: “each year more than 100,000 patients are hospitalized for NSAID-related GI complications” and “that 16,500 persons die annually from these complications.”

A significant number of these hospitalizations and deaths may have been caused by non-aspirin NSAIDs as research has found that chronic (i.e. daily) use of these medications can raise a person’s risk of heart attack and stroke significantly more than was originally believed. As a consequence, the FDA has required pharmaceutical companies to drop the word “may” and make it clear on their warning labels that “NSAIDs cause an increased risk of serious heart thrombotic events, including myocardial infarction and stroke, which can be fatal. This risk may occur early in treatment and may increase with duration of use.”

People with cardiovascular disease or those who have risk factors for developing it need to question whether the pain relief they receive from NSAIDs is worth the increased risk for heart attack or stroke.

This is not an easy decision to make. With their debilitating and often fatal side effects, opioids, such as Vicodin or Percocet, are a non-starter as an NSAID alternative. Acetaminophens, such as Tylenol, can provide some pain relief, but they are not an anti-inflammatory and for many will not provide as much relief as NSAIDs. Neither will aspirin, which non-aspirin NSAIDs were developed to replace.

Of course, nowhere in the medical literature about the newly reported dangers of non-aspirin NSAIDS does marijuana come up for discussion. It seems the medical establishment would rather people suffer from pain or die from continuing to use NSAIDs than buck the iron fist of law enforcement and admit that marijuana has significant medicinal value.

Cannabis is a powerful anti-inflammatory with none of the debilitating and dangerous side effects of NSAIDs. It follows a different route than NSAIDs to suppress inflammation. Unlike non-aspirin NSAIDs, which work by blocking the production of COX enzymes that produce inflammatory prostaglandins, cannabis’ anti-inflammatory properties are achieved by modulating the formation of inflammatory cytokine molecules and free radical production through the regulation of ion channels.

Unlike NSAIDs whose side effects are both debilitating and lethal, the only significant side effect of using cannabis to reduce inflammation is that it makes the user feel good.

The effectiveness of non-aspirin NSAIDs and their easy availability, affordability and perceived safety meant that people were not looking for alternatives. Now many will be.

For cannabis to be effective as an alternative to NSAIDs, it needs to be as easily available as NSAIDs. A paper issued by the National Bureau of Economic Research concluded “that providing broader access to medical marijuana may have the potential benefit of reducing abuse of highly addictive painkillers.” It could be reasonably concluded that broader access to cannabis could also reduce the chronic use of NSAIDs thereby improving the health and safety of 17 million Americans. 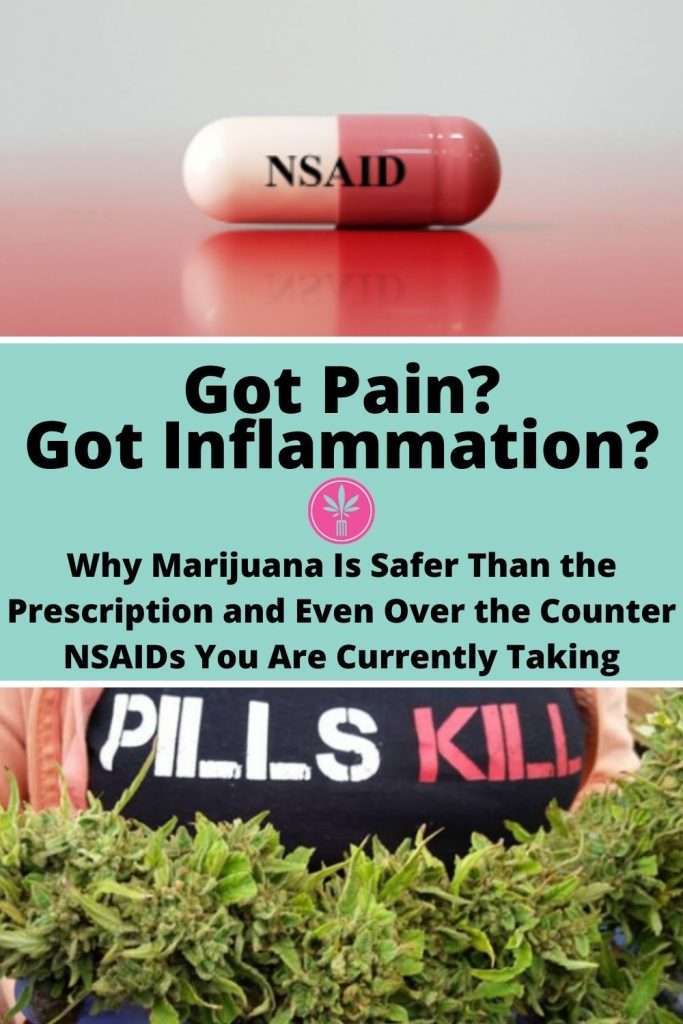