What is Cannabis Rosin

Let’s start this discussion by defining what I mean when I say cannabis rosin.  Rosin can come in many forms: weed rosin, wax rosin, hash rosin, and even live rosin (more on this later), but all rosins have two big things in common

So what exactly is a rosin? 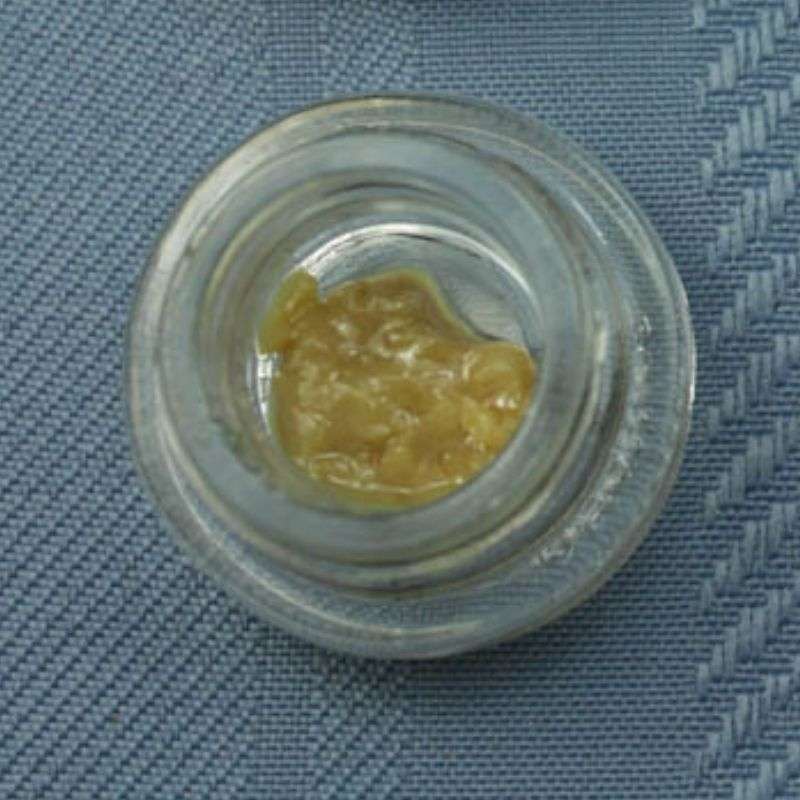 Cannabis Rosin is a thick, oil-like substance that physically resembles BHOs and other solvent concentrates. However, pressing rosin removes all plant matter, but without the use of any chemicals at all.

Because all rosins are solventless rosins, they represent some of the purist and most natural concentrates available.

Unlike concentrates extracted with butane or other hydrocarbon solvents, there is NEVER a danger of residual solvents left over when pressing rosin from cannabis because there are never any solvents involved in the first place.

I asked Ryan Mayer, producer of Rosinbomb rosin presses, what he thinks about the future of his products and cannabis rosin as a whole.

“People will demand more of this when you educate them on the benefits of rosin when compared to other alternatives," he said.

"It is worth noting that rosin extracts can be used for more than vaping – you can add them to your favorite foods, create topicals and lotions, or apply them directly to flower."

Speaking on vaping, Mayer added “The experience when vaping rosins is superior. All of the terpenes and cannabinoids are in full form to offer robust flavor.  As more consumers become interested in holistic, organic methodologies and want to apply them to their cannabis routine, rosin extracts will fit hand-in-glove with their emphasis on purity and quality.”

The best news for consumers who are interested in making their own rosin at home?  With the proper equipment, the process of pressing rosin is extremely simple, requires no professional expertise in the field of botanical extractions, and happens in under two minutes.  It’s even easier and less fuss than making dry ice kief, another simple natural cannabis extraction (although not nearly as potent or free from plant matter).

What Kinds of Cannabis to Use for Pressing Rosin

What kind of cannabis can you use to make rosin?  The options are many.  Of course flowers can be pressed.  But a lot of people like to press concentrates.  So in addition to being known as a “rosin press machine,” some people might call the rosin press a hash press, a wax press, or a kief press. (Some people even call it a dabs press because it produces great material for dabbing/vaporizing).

All of these substances can be pressed into a thick oily rosin concentrate.

Rosin making, however, is not a place to make treasure from trash, like you can do with cooking by using trim, shake, and lesser quality weed.

We once did an experiment pressing two grams of some old dried herb.  While this would have been fine for cooking and making edibles, it produced virtually no rosin at all.  Conversely, the identical amount of top shelf produced enough rosin for 7 or 8 rosin dabs.  It also tasted exquisite.

Generally speaking, the fresher the cannabis the better.  That said, you do need weed that has been properly cured as water is not a good thing when making rosin.  Weed at 62 – 68% humidity is perfect.  Using Boveda humidity control packs can help you keep your cannabis in that perfect humidity zone, even with long term storage.

Lesser quality hash pressed in a rosin press is a bit more forgiving than low quality flowers, but even here, the better quality going into the press equals a better quality coming out.  Pressing hash will separate what little plant materials remains after hash making, and leaves you with sticky potent rosin.

While rosin might be most popular vaporized in dab rigs, you can also add it to smoking material for an extra strong and flavorful smoke.

We find that dabbing rosin produces a high that’s more akin to a strong flower smoking high as opposed to the often overpowering buzz of BHOs. 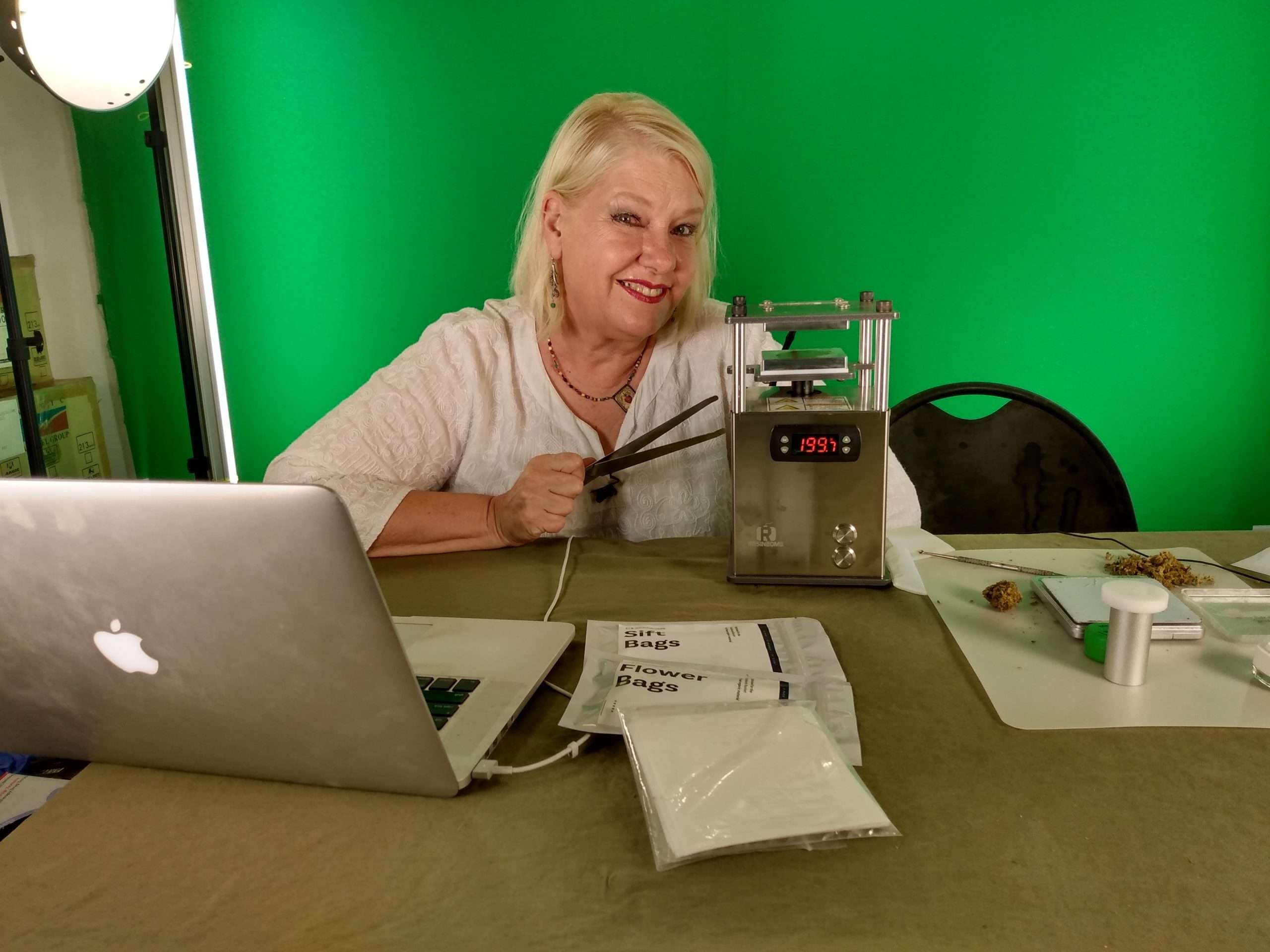 Cannabis Rosin is made by using heat and pressure.  Some people claim they get good results pressing rosin with a hair straightener as a low cost alternative to a rosin press machine.  Personally I have never had any luck with this method.  When you think about it, it only makes sense.  Even if you are the circus strongman (or woman), a hair straightener and your two arms cannot match the 1500 to 5000 pounds or more pounds of pressure that a quality rosin press can provide.

When it comes to buying a press for rosin for home consumers, I am a BIG FAN of the Rosinbomb Rocket marijuana rosin press.  So much so that I agreed to become a brand ambassador (and I don’t do that lightly).

There are a number of reasons I think this is the best rosin press over others that I have seen and tried:

Temperature is controlled by the user. The press comes to the customer programmed to an average recommended temperature for flowers of 220 degrees Fahrenheit.

All Rosinbomb presses are adjustable between ambient temperature and 300 degrees Fahrenheit. The heat differential from the outside to the center of the plate is approximately 2° Fahrenheit. If you order a 230V unit, your unit will show Celsius on the heat temperature display. 110V units display temperature in Fahrenheit.

If I had any complaint at all about the Rosinbomb Rocket, it is that somebody needs to seriously re-write the instructions that come with the rosin press machine. They just are not clear and actually I found them quite confusing.  And they need not be as the Rocket is super simple to use.  Watch the video above to see basically all you need to know:

For more about recommended times and temperatures, see the Rosin Making Tips section below.

Get 10% off orders from Rosinbomb by entering the coupon code CHERI at checkout.

A Complete Out of the Box Weed Rosin Making Solution 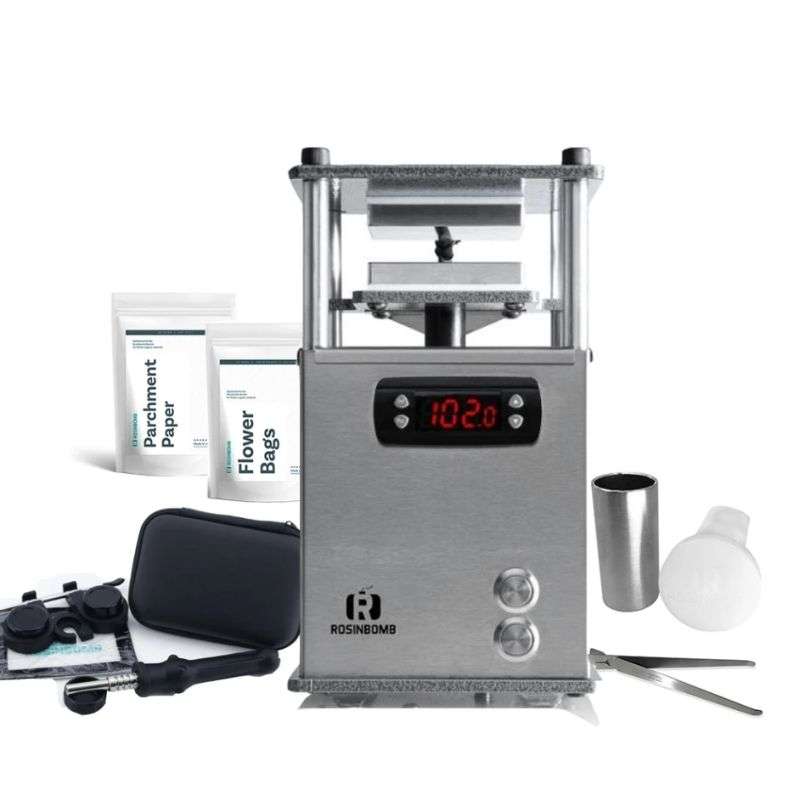 In addition to selling the Rocket Rosin Press machine separately, Rosinbomb offers a complete rosin making package that comes with everything you need. It’s a terrific value that includes:

Get 10% off orders from Rosinbomb by entering the coupon code CHERI at checkout.

To turn your flower into rosin with a press like the Rosinbomb Rocket is as simple as:

Recommended temperature for pressing rosin from cannabis varies between 190°F-220°F. Each strain reacts a little differently, so it is a good idea to experiment with a small amount, say a single gram, to know how it reacts before pressing more volume.

Ryan Mayer of Rosinbomb says that 205 degrees F is a good place to start, then work your way up from there.

Hemp, yes you can press CBD Rosin, is more difficult and needs a higher temperature, sometimes as much as 220 degrees F.

What to do with Rosin Pucks

After you use a rosin press machine to press cannabis flower, you will be left with a flattened pancake of pressed weed, also known as a pressed rosin puck.

DO NOT THROW THE ROSIN PUCKS OUT!!!

According the Ryan Mayer, inventor of the Rosinbomb press, about 45% of the plant’s cannabinoids are left after pressing. That is a lot!

I like to use the pressed rosin puck for making infusions for edibles, just use more than you would regular flower as some of the cannabis has been pressed out.

However, if you start with really strong cannabis, you might not even have to worry about using more.

For instance, I test the recipes on this website using 10% THC cannabis. You could press some 22% THC cannabis and use the pucks at the same amounts given in the dosing section of the recipes and still be right on the money. Make sense?

You can also use the leftover rison pucks for making infusions for topicals. Or you could even smoke or vape them.

Whatever you do, save the pressed cannabis rosin pucks and put them to good use.  You will have stretched your cannabis stash while still enjoying premium rosin!

Live rosin is made from freshly picked, in other words, uncured cannabis plants. However, and this is important, those fresh pants MUST be freeze dried in order to produce Live Rosin. Since this involves an extremely expensive piece of extra equipment, most home consumers will probably not be making Live Rosin. However, if you do happen to have a freeze drying machine, know that you can produce Live Rosin in a rosin press by pressing your freshly freeze dried cannabis. 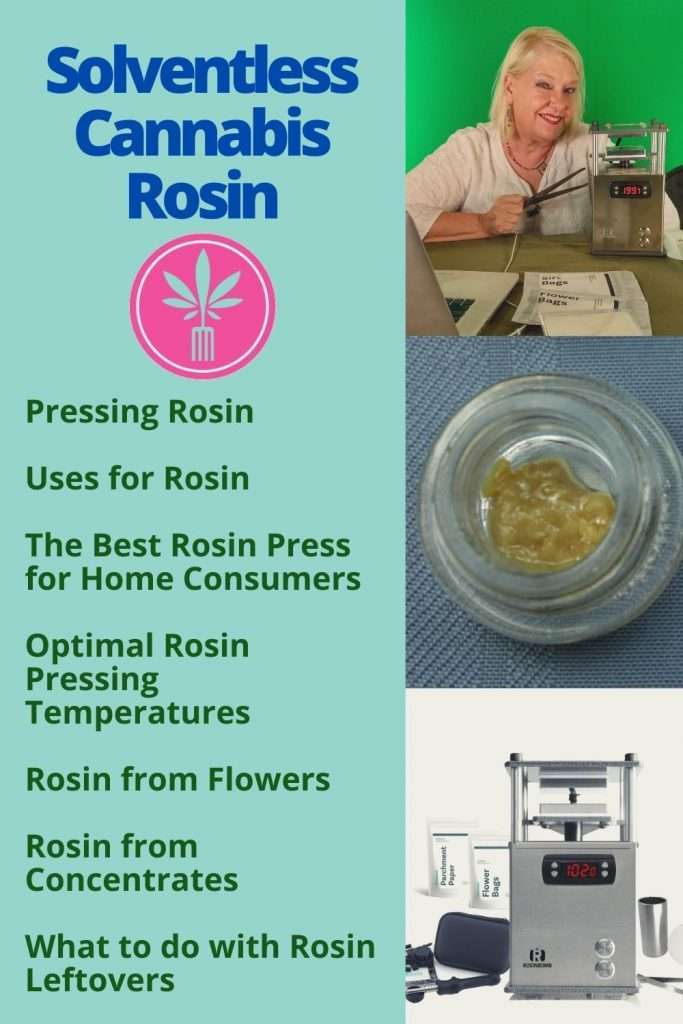 (This post contain affiliate links, meaning if you make a purchase, I get a small commission at no cost to you.  However, know that I NEVER recommend products that I do not actually like and use.)

Can you eat decarboxylated weed?