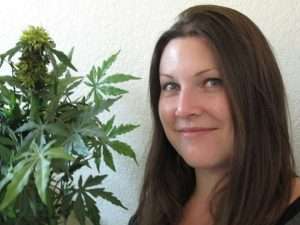 We have all heard how we should think globally but act locally.  When it comes to the issue of cannabis prohibition, there’s no greater example of approaching the global problem at a local level than Kandice Hawes.

Arrested for possessing under an ounce of marijuana in her youth, Kandice lost her student funding. Since she could no longer afford college full time, she instead used her time to found Orange County (California) NORML, the organization’s most active chapter, when she was just 21 years old. Now over 13 years later, OC NORML was awarded NORML’s first ever Outstanding Chapter award. 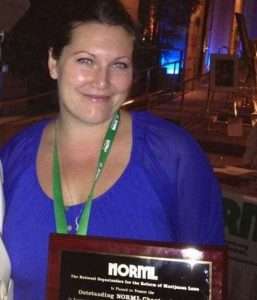 Along the way Kandice Hawes continued to pursue her education, albeit at a far slower rate than was originally intended. Her focus is on public policy with the goal of changing marijuana at a legislative level.  Her long time dedication has tranformed her  into the go-to voice for cannabis reform in Orange County, California, so she’s in an excellent position to move those goals forward.

In addition to her duties as Executive Director of Orange County NORML, Kandice served in the leadership position for Cal State Fullerton’s Students for Sensible Drug Policy (SSDP) chapter, before she graduated in spring of 2016, and she currently serves on the board of directors of The Marijuana Lifer Project, a nonprofit organization I founded to advocate for cannabis prisoners serving life sentences for marijuana.

When I asked what inspired her activism, Kandice answered:

I live in a conservative county. I know many responsible, law abiding citizens who use cannabis here who have to hide elements of their life from neighbors, friends, and family because they are seen as criminals.  People who use cannabis should not be made to feel that they are criminals for a behavior that does not affect others. I got involved in this fight to change the way society views responsible cannabis consumers, and there was no better place to start than in my own back yard. 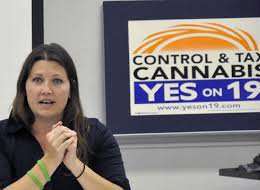