What's New...
You are at:Home»News and Politics»The Week In Weed»The Week in Weed 12-10-16 Marijuana News Round-Up

Group Files Petition to Make DEA Stop Lying About Marijuana — Americans for Safe Access (ASA), a national nonprofit dedicated to ensuring safe and legal access to cannabis for therapeutic use and research, on Monday filed a petition with the Department of Justice (DOJ) demanding that the Drug Enforcement Administration (DEA) immediately update its misinformation about cannabis.

Don’t Expect Ben Carson to Allow Marijuana Use in Public Housing — The appointment is bad news for cannabis advocates because the appointment of Carson is a big win for the status quo. The secretary of housing and urban development manages federal public housing programs and develops policies to combat issues like homelessness and housing discrimination. But under Carson’s regime, HUD will likely uphold discrimination against cannabis consumers. 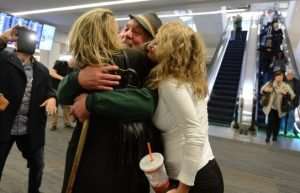 Marijuana Activist Eddy Lepp Free After Long Term Prison Sentence — Free after eight years of federal imprisonment, one of the nation’s most celebrated cannabis convicts came home to California on Wednesday, walking off a United Airlines flight into the warm embrace of supporters — and a profoundly changed world. Charles “Eddy” Lepp, a defiant 64-year-old Vietnam vet and ordained Rastafarian minister, was convicted on federal felony charges in 2007 for doing something that California now considers legal because of last month’s passage of Proposition 64: growing marijuana.

Law That Lets Police Seize $2.6 Billion in Assets Raises Questions — Law enforcement seized nearly $2.6 billion worth of airplanes, houses, cash, jewelry, cars and other items from suspected wrongdoers last year, according to data from the U.S. Department of Justice. It was the biggest one-year haul by federal, state and local police agencies since 2011, and it occurred even as the practice is coming under growing criticism. Critics charge that allowing law enforcement to reap financial reward from such seizures creates perverse incentives, encouraging the pursuit of property over the impartial administration of justice.

Uruguay to Have Marijuana Museum — Marijuana-friendly Uruguay will soon have a museum dedicated to pot. “It is a way to connect people who love nature, art and science,” said the director of the museum, Eduardo Blasina. The museum, opening Friday in Montevideo, will help people learn more about one of the world’s oldest crops, Blasina said. What is more, marijuana is now one of humanity’s most important plants because of its medicinal benefits, he added. Amsterdam, which also has a hash and marijuana museum, is contributing items for display.

Grand Rapids, MI Police Raid Every Dispensary in Town — With little warning, seven medical cannabis dispensaries in and around Grand Rapids, Michigan, were raided by law enforcement teams last week. Law enforcement officials seized cash and cannabis products that were in the shop at the time of the raids, resulting in a significant financial loss for the dispensaries.

Judge Rules to Reopen Montana Medical Marijuana Dispensaries Immediately — A judge on Wednesday cleared the way for Montana’s medical marijuana dispensaries to reopen after a three-month hiatus by ruling that a drafting error in a voter-approved ballot initiative should not delay the measure’s implementation.

Vermont Governor Offers to Pardon Marijuana Convictions — Just before he leaves office, Gov. Peter Shumlin is planning to pardon people who were convicted of possessing up to one ounce of marijuana. Vermont removed criminal penalties for small amounts of marijuana possession in 2013. Shumlin said in a statement that pardoning the convictions now is “the right thing to do,” and he hopes to review as many applications as possible before he leaves office in the new year.

Jimmy Kimmel is Ready to Pass Out Joints at the Oscars —  We’ve had pizza and Girl Scout cookies distributed at the Oscars. But Jimmy Kimmel, officially announced Monday as next year’s Academy Awards host, has another idea. In an effort to shake things up, Kimmel proposed getting everyone high before the Feb. 26 ceremony. “Marijuana will be legal for recreational use in February,” he said on his show. Turning to security guard Guillermo Rodriguez, he added, “Maybe you can pass some of that around on the red carpet before the show and then we just see what happens.”

Road Trip to Punta Banda AKA Stoners in Baja — Join a groups of like-minded friends on a 420-friendly road trip south-of-the-border as we explore Mexico’s wine country in Valle de Guadalupe and the famed La Bufadora. 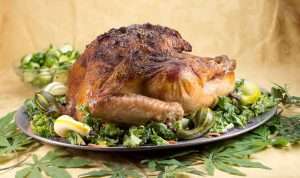 That Turkey’s High!: How to Make a Marijuana Deep Fried Turkey — Deep frying a turkey, let alone making a marijuana deep fried turkey, may sound like a strange concept. Trust me, it doesn’t come out like you’d think. Deep fried turkey is moist and delicious and not at all greasy. And my injectable marijuana turkey marinade recipes are so flavorful, you’ll never notice the taste of the cannabis!

Host a Holiday Cannabis Cookie Exchange Party — This time of year friends all over the country are getting together for holiday cookie swap parties. But think how much more fun it would be if everyone were exchanging cannabis-infused cookies! The basic idea is for everyone at the party to bring a batch of their homemade cookies to share – enough give each guest at the party about six cookies. That way each person goes home with a variety of different cookies to enjoy throughout the holiday season.