What's New...
You are at:Home»News and Politics»The Week In Weed»The Week in Weed 3-5-16 Cannabis News 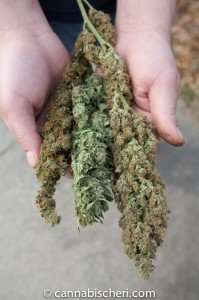 Latest Science Debunks Age-Old Marijuana Myths…Again — Contentions that scientists have failed to conduct sufficient research on the health and societal effects of cannabis are unfounded. A keyword search on the National Library of Medicine database reveals over 23,000 peer-reviewed papers specific to the marijuana plant, and new scientific discoveries are published almost daily debunking the federal government’s claims that the herb is a highly dangerous substance lacking therapeutic efficacy. Here are five new cannabis-centric studies that challenge longstanding marijuana myths.

Legal Marijuana is Doing What the Drug War Couldn’t — The latest data from the U.S. Border Patrol shows that last year, marijuana seizures along the southwest border tumbled to their lowest level in at least a decade. Agents snagged roughly 1.5 million pounds of marijuana at the border, down from a peak of nearly 4 million pounds in 2009.

Oregon: World Famous Cannabis Cafe to Close Saturday After New law Enforcement — The owner of World Famous Cannabis Café plans to close its doors Saturday. Madeline Martinez said that an expansion of the Indoor Clean Air Act prevents her to gather publicly with other cannabis smokers. According to the Oregon Health Authority, lawmakers expanded the act to prohibit the use of devises such as vaporizer pen and e-cigarettes in public areas and workplaces. This year, marijuana was added to the law which initially targeted only tobacco.

Marijuana Recipes: Roasted Lemon Haze Parmesan Brussels Sprouts — This marijuana recipe is not your grandmother’s Brussels Sprouts! Roasting brings out the vegetable’s nutty flavor that pairs wonderfully with tangy lemon and Parmesan for a medicated side dish that it sure to steal the spotlight of any dinner!

Cannabis History: Anslinger, Hearst & Rockefeller, The Unholy Trinity — When you look historically at marijuana prohibition in the United States, three people stand above the rest in bearing responsibility for orchestrating this atrocity that continues to plague our country, and in fact the planet, to this day. Of course these three men were not totally responsible.  They had help from countless others, and more stood by in cohesion, ignorance and/or apathy and allowed it to happen.  But without these three: Harry Anslinger, William Randolph Hearst, and John D. Rockefeller, Jr., it is arguable that marijuana prohibition would have never happened.