What's New...
You are at:Home»News and Politics»The Week In Weed»The Week in Weed 4-22-17 Marijuana News Round-Up

This Week’s Marijuana News Round-Up: Memo to Homeland Security: Marijuana is NOT a Gateway Drug; The Exhaustive List of Everyone Who Has Ever Died of a Marijuana Overdose; New Maris Poll Shows Families Surprisingly Open About Marijuana Use; Brands Want to Capitalize on 4-20, Advocates Say Grow Up; The LA Chef Changing the Face of Cannabis; 4 Charged in Marijuana Breath Detector Stock Scam; and more.

Memo to Homeland Security: Marijuana is NOT a Gateway Drug — Department of Homeland Security Secretary John Kelly alleges that marijuana is a “dangerous gateway drug that frequently leads to the use of harder drugs.” In fact, the available science concludes just the opposite. More than half of American adults have tried cannabis, according to data compiled by the Centers for Disease Control. Statistically, the overwhelming majority of these individuals never go on to try another illicit substance, an empirical reality that persuaded investigators at the RAND Corporation to conclude, ”Marijuana has no causal influence over hard drug initiation.” Moreover, by the time these individuals reach age 30, most of them have significantly decreased their cannabis use or no longer indulge in the substance at all.

The Exhaustive List of Everyone Who Has Ever Died of a Marijuana Overdose — The government’s message is clear: Marijuana and the psychoactive compound within it ― tetrahydrocannabinol, or THC ― poses a severe hazard to your health. To get a better sense of just how dangerous these substances are, The Huffington Post set out to compile a list of every person who has ever died solely as the result of a marijuana overdose. Click for the results.

New Maris Poll Shows Families Surprisingly Open About Marijuana Use — As the law evolves, and as social attitudes evolve along with it, more and more Americans are overcoming old taboos and incorporating pot into their family lives. Marijuana use has become surprisingly open and acceptable in families where adults use marijuana — and, in fact, the majority of Americans who say they use marijuana are parents (54 percent).

Brands Want to Capitalize on 4-20, Advocates Say Grow Up — Case in point: Ask any one of these brands what it is, exactly, that people are celebrating on 4/20, and you’ll make tricky work for its spokespeople, who have to acknowledge the “holiday,” but don’t want to cross a line for their corporation by actually, you know, acknowledging the holiday. Which leads to clinically worded, coded emails like this one, from Totino’s Pizza Rolls spokesman Mike Siemienas: “Totino’s does some regional promotions focused on current events in specific markets,” he said. “We are running a similar campaign this year by celebrating our fans who love pizza rolls.”

4 Charged in Marijuana Breath Detector Stock Scam —  Four men were arrested Friday on charges of scheming to manipulate the stock of a company that, most recently, planned to market and distribute devices to find marijuana on a user’s breath, Brooklyn federal prosecutors said. 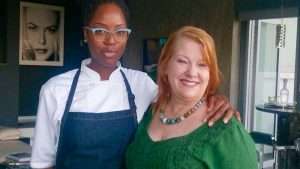 Meet the Los Angeles Chef Changing the Face of Cannabis — A  decade ago, Los Angeles Chef Andrea Drummer never imagined she’d be on the leading edge of the cannabis culinary scene.  She was born in Hollywood – Florida that is. Her family was conservative, and she started her career working for nonprofits and telling at-risk youth to “just say no.”