What's New...
You are at:Home»News and Politics»The Week in Weed 3-7-15 Marijuana News 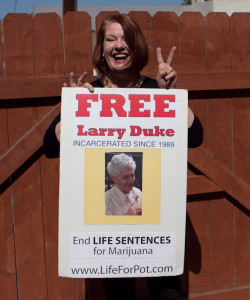 This Week’s Marijuana News Round-Up: Life for Pot Prisoner Larry Duke Released; Rand Paul Calls Out Jeb Bush on Marijuana Hypocrisy; How American Support for Marijuana Legalization Has Grown; So How Strong Is That Weed Anyway?; Is It Time to Free George Martorano?; DEA Warns of Stoned Rabbits If Utah Passes Medical Marijuana Bill; Tribes from Around the Country Meet to Discuss Marijuana Legalization; and much more.

So How Strong Is That Weed Anyway? — While there’s almost certainly more super-strong pot available today—if only by the fact that it’s now legal to buy in multiple states—it doesn’t mean that all marijuana is ultra-potent today, which is how the narrative about potency is often framed. There’s also a point at which most strains can’t get much stronger.

Feds Launch Massive Study of Kids and Pot — The federal government is embarking on a massive study of young people’s use of marijuana, a project with implications for the legalization debate.  With the goal of following roughly 10,000 young Americans over 10 years, the so-called ABCD (Adolescent Brain Cognitive Development) study will try to answer important questions about how pot impacts young people’s brains, which are still developing into their mid-twenties.

Tribes from Around the Country Meet to Discuss Marijuana Legalization — Representatives of about 75 tribes from around the country converged on the Tulalip Indian Tribe’s resort and casino for a $605-a-head seminar on the regulatory, legal and social issues related to pot legalization. That’s a small fraction of the nation’s 566 recognized tribes, and many of the attendees were from smaller tribes looking for a potential economic edge.

How American Support for Marijuana Legalization Has Grown — Since 1973, General Social Survey has been asking Americans, “Do you think the use of marijuana should be made legal or not?” Back then, only 19 percent of Americans favored marijuana legalization. But in 2014, nearly 52 percent said they support legalization, with 42 percent opposed and 7 percent undecided. Last year’s findings are a jump of about 9 percentage points from 2012, the last time the group asked the question.

DEA Warns of Stoned Rabbits If Utah Passes Medical Marijuana Bill — Utah is considering a bill that would allow patients with certain debilitating conditions to be treated with edible forms of marijuana. If the bill passes, the state’s wildlife may “cultivate a taste” for the plant, lose their fear of humans, and basically be high all the time. That’s according to testimony presented to a Utah Senate panel  last week by an agent of the Drug Enforcement Administration.

Charlotte’s Tangled Web of Questionable Ethics in Florida — More rule-making trouble for poor Patty Nelson in Florida’s Office of Compassionate Use.  First it was Bob Wallace of Chestnut Hill Nursery in Alachua, white-lying his way onto the medical marijuana rule-making panel.  Now, sadly, it’s committee members Joel Stanley, owner of the “Charlotte’s Web” strain, and Holly Moseley, the ‘patient representative’ on the panel. They failed to disclose to Nelson, to fellow committee members and to the public that they have a business relationship. It is a serious breach of ethics and possibly a criminal violation.