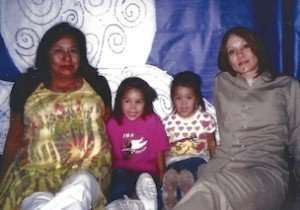 Marijuana Prisoners: Crystal Munoz serving 19 Years + for Pot with her mother and daughters.

CRYSTAL IS FREE!!!
President Trump granted Crystal Munoz executive clemency and she is back with her family.

Marijuana Prisoners: More About Crystal Munoz and Her Case

Marijuana users are frequently given the advice to never chat or “cooperate” with law enforcement, and there’s no better example of why not than Crystal Munoz, currently serving a federal prison sentence of 19 years and 10 months.

Her nightmare began when DEA agents visited Munoz’s home. They assured the young mother of an infant daughter, who happened to be pregnant with her third child at the time, that she was not in any kind of trouble. The agents claimed they merely needed to speak with Crystal to get a few questions answered and details cleared up about an incident that had taken place 3 years earlier.

The activities in question involved a map that Crystal had drawn showing how to circumvent a drug checkpoint. She herself was never caught with any drugs. Her indictment and prosecution was based entirely on the testimony of the people who were actually caught trafficking the drugs 3 years earlier.

The government offered no plea deal. Crystal plead not guilty and took her case to trial.

Because she had drawn the map, prosecutors painted Crystal as a leader in the conspiracy to distribute 1000 kilos or more of marijuana, a factor that played into her long sentence, along with two prior misdemeanors for possession on her record. Her original indictment included charges for cocaine, which prosecutors dropped the day of trial, as they had no proof of the allegation.

While the people who were actually doing the dealing received between 5 to 7 years each, Munoz, who only drew a map, received a sentence of 19 years and 10 months. 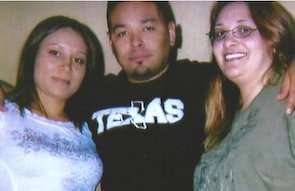 Marijuana Prisoners: Crystal Munoz serving 19 Years + for Pot with her mother and husband.

Even before incarceration Crystal had experienced great tragedy in her life. Her first child, a son, choked to death while at school at the age of five.

Locking away the young wife and mother for the greater part of two decades has only added to the stress and hardship the entire family has endured. Crystal’s second daughter was born in prison. Her husband and mother struggle every day to keep the family going and care for the two young girls.

Nonetheless, Crystal Munoz has used her time behind bars to better herself, completing a yearlong Change program, an 18-month long Life Connection program, a 40- hour residential drug abuse program, and completed a course to become a personal fitness trainer. She has even worked as a hospice volunteer.

Crystal is grateful that so many of her family members have stepped up to help care for her children, but is always aware of the burden her incarceration has placed on them and she longs to be able to take an active role in her children’s lives as well as care for her aging parents and grandparents.

Crystal’s biggest hope is for executive clemency, as a Presidential pardon would allow her to return to her family and once again become a wife and mother, before her children are already grown.

Crystal loves to get cards and letters.  Write to her here: