What's New...
You are at:Home»Prison Outreach»Paraplegic Michael Pelletier is Serving Life for Pot 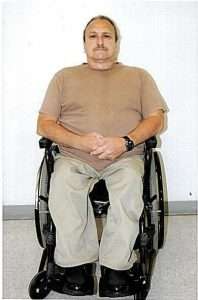 Life for Pot Prisoners: Michael Pelletier, #11109-036
Offense: Conspiracy to Import and Distribute Marijuana
Sentence: Life
Incarcerated Since: 2004
Priors: for marijuana only
Heath Issues: Michael has been a paraplegic since he lost the use of his legs in a farming accident at age 11.  He has had no physical therapy since being incarcerated and has four blood clots in his left leg.
Date of Birth: 1/31/56
Family: No children.  Elderly father, siblings.

About Life for Pot Prisoner Michael Pelletier and His Case

Michael Pelletier, a wheelchair bound paraplegic since the age of 11, sits in a wheelchair in federal prison serving a sentence of life without parole for a nonviolent, victimless marijuana conspiracy offense. To listen to prosecutors and press reports at the time of trial, Pelletier was a calculating kingpin behind a multi-million dollar drug ring, living a lavish, opulent lifestyle off his ill-gotten gains. That narrative is vastly different from the reality.

It is not just Michael Pelletier’s word that the prosecution’s narrative was largely fiction, the case’s star witness admitted he lied to a federal grand jury and “exaggerated” the size and scope of Pelletier’s alleged marijuana importing business. Of course, as in all such cases, this witness and others had compelling motivation to lie, exaggerate, and implicate as many others as possible, as doing so would cut or eliminate their own prison time because they “cooperated with prosecutors.” 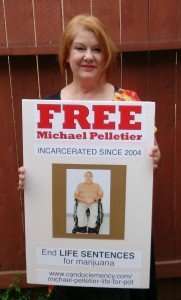 The sensationalistic press accounts of the trial painted Pelletier as criminal mastermind overseeing a sophisticated big scale drug operation involving  cadres of ex-cons and criminal wannabees. But star witness Adam Halford admitted at Pelletier’s trial he had exaggerated the amount of marijuana being imported to the grand jury. Pelletier says the testimony was absurd, “we have a witness who admits he never learned to swim claiming to be swimming across the St. John River with amounts of cannabis he could not have even lifted.”

Pelletier says the reality is he was more of a facilitator than a distributor.  He lost the use of his legs when he was run over by a tractor at age 11, and first discovered the therapeutic benefits of cannabis at age 14 for treating both the physical and psychological symptoms that remained long after that terrible accident. While he has no idea how much Halford might have transported for others, he was a single customer who purchased enough to treat his own medical conditions of pain, spasticity, and bladder ailments. He bought in larger quantities because it was a more affordable way to get the medicine he needed and gave him a little extra to sell so he could afford it. 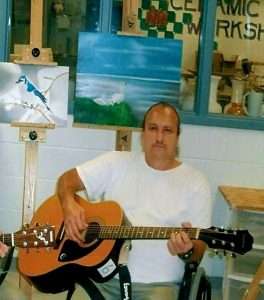 Michael Pelletier, serving life for pot, with his guitar and artwork at USP Terre Haute.

Despite admitting to lying under oath and admitting to transporting drugs, Adam Halford got a slap on the wrist while Michael Pelletier received a life without parole sentence. The judge who sentenced Pelletier said, “It is striking you ran a sophisticated drug operation from your wheelchair. That makes the court wonder what you could have done if you turned to legitimate endeavors.”

Had Judge Woodcock bothered to consider Michael Pelletier’s background, instead of relying on the words of liars, felons, and snitches, he would have discovered many “legitimate” accomplishments, despite the man’s severe handicap. Michael studied at the Bulova School of Watchmaking and became a certified watchmaker and jeweler. He increased the value of money and assets shared with him by his parents with careful investment and savings. He bought and repaired cars that he sold at a profit. He and his then girlfriend invested in a beauty salon that she still runs to this day. He did not get rich but he survived. Never did he think his meager earnings would be used against him as being part of “criminal proceedings.”

Even in prison Michael Pelletier has never stopped achieving and growing. He is learning how to play the guitar and has taken up oil painting and by all account he is quite good.

Pelletier says he does not seek sympathy or special treatment, but also does not feel the punishment fits his crime. He says, “Having a life sentence is a feeling of dying every day. It’s worse than death that happens one time. It’s a living death.” 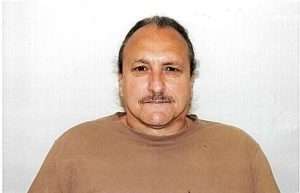 Michael loves to get cards and letters from supporters.  Write to him at this address: 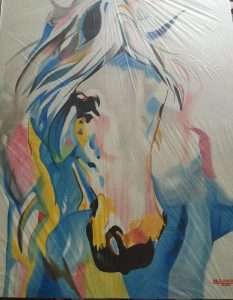 Getting to Know Life for Pot Prisoner Michael Pelletier

I asked Michael Pelletier a series of questions to help everyone get to know him better, Here’s what he said:

What meal or food do you crave most that you will want to eat when you get out?
I miss my grill BIG TIME so t-bone steak, baby back ribs, and of course, as I am from Maine, Maine lobster! 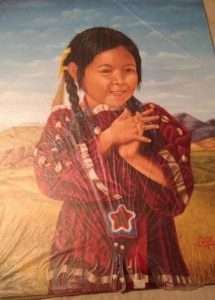 What is your favorite color?
Cerulean Blue.

If you could walk out tomorrow and go anywhere – where would it be and why?
To Madawaska, Maine to see my 89 year old father before he passes away!

If you could travel to any country – where would it be and why?
To the Netherlands because it is a country that has common sense about cannabis!

What do you most want people to understand about being incarcerated that you don’t think they understand?
When a paraplegic or someone confined to a wheelchair is incarcerated, we are confined to our cells.  We can’t work in the kitchen, on the outside crew, in maintenance, etc.  We can’t play basketball, baseball, handball, or any sport.  Our time is twice as hard!  Having a life sentence is a feeling of dying every day. It’s worse than death that happens one time. It’s a living death. 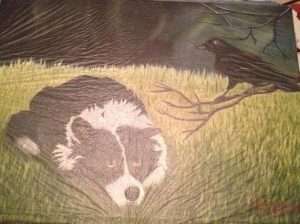