What's New...
You are at:Home»Prison Outreach»Paul Free is Serving Life for Pot 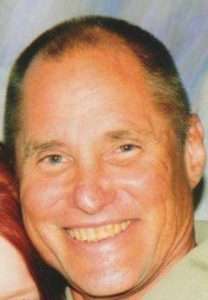 Life for Pot Prisoners: Paul Free #42235-198
Offense: Convicted of violating: 21 U.S.C. Section 841(a)(1) and Section 846 – (Conspiracy) for marijuana.
Sentence: Life Without Parole – Natural Death
Incarcerated Since: 1995
Date of Birth: 8/27/1950
Family: No children.
Priors: “Conspiracy to Import a Non-narcotic” (Marijuana) & a “Possession of a Controlled Substance (Marijuana) with Intent to Distribute”

About Life for Pot Prisoner Paul Free and His Case

Were the sentence of life in prison for marijuana not absurd enough, California native Paul Free, 64, has the distinction of serving over 21 years and counting on a life sentence for a nonviolent marijuana crime he can clearly prove he not only did not commit, but also physically could not possibly have committed.

The ironically named Free was found guilty of conspiracy to possess with intent to distribute a controlled substance (marijuana) in 1995. 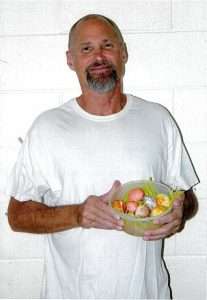 It wasn’t until the end of Free’s trial that he came to realize there actually was a man named Paul involved in the case, but it was a different Paul, one named Paul Atkinson. One who did not match his physical description at all.Free, who previously served three years for a prior conviction for conspiracy to import a non-narcotic (marijuana) and one for the possession with intent to deliver a few pounds of that same pot, originally thought he was simply being set up for the crime that would put him behind bars for life.

Two witnesses came forward during trial, separately from each other. Their attorneys informed Free’s attorney that each had seen Paul Free in the courtroom and realized that he was NOT the person with whom they distributed marijuana. When Free asked his attorney to bring these men into court to testify, the attorney refused.

Free then requested for his accuser to pick him out of a line up.  At first the prosecutor refused, but finally agreed with two conditions: it was to only be a photo line up, and Paul Free’s attorney was not to be present when it happened. Even more unbelievable, Free’s so-called “defense” attorney agreed!

Free then implored the judge to allow him to replace his attorney, telling the judge, “my attorney refuses to interview or subpoena witnesses.”

The judge denied the request. This same judge fell asleep on the bench five times during Paul Free’s trial.

Paul Free has spent the last two decades in prison trying to get anyone in a position of legal authority to hear his appeal. So far to no avail. He has hired private investigators, most of whom took his money – which was difficult to save on a prisoner’s slave wages — and disappeared never to be heard from again.

But some did come through. In the interim time other defendants convicted in the same conspiracy case have been interviewed and have signed affidavits swearing that Paul Free is not the man with whom they committed the charged crimes.

Just recently, the man who picked Free out of that infamous photo line-up and testified on the stand against him said that when he told the officers that he didn’t recognize anyone in the photo line up, one of the officers took his finger, placed it on a photo of Paul Free and informed him “that’s the man we want, that’s Paul Free.” This same witness said he was threatened with death if he did not cooperate and testify against Free and has only come forward now that Paul Atkinson, the real Paul in this case, has passed away and is no longer a threat. 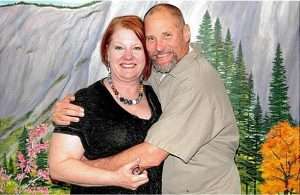 Beyond witness testimony, Paul Free has physical evidence – hotel and car rental receipts, phone bills, a traffic ticket and a sworn affidavit from his college professor that establish beyond any doubt that he was hundreds of miles from where the crime took place when it took place. He would have had to be in a science fiction time warp that allowed him to arrive before he left to physically have been able to transport the load of marijuana for which he now serves time.

Nonetheless, the court has turned a blind eye to Free’s motions for appeal and to introduce the compelling new evidence and witness testimony that indisputably proves his innocence. The reasons given for denial show the presiding judges never so much as read the first page. Sadly, prisoners’ motions and appeals are regularly denied without so much as a glance.

While he enters his 21st year of incarceration, Paul Free remains cautiously hopeful that someone at the ninth circuit court appeals is paying attention when he sends in evidence of the latest witness in a line who have come forward to say he is not the guy who did this crime — and let’s remind ourselves, the “crime” in question that carries a LIFE SENTENCE involves nothing more than marijuana.
But Paul Free has been through this enough times to know the court has a habit of not looking at things they don’t want to see, especially when it involves wrong doing by members of their own team. The courts never comment on or dispute any of Paul Free’s evidence, they just summarily deny his motions.

In the absence of a fair trial, even decades later, Free’s best hope lies with executive clemency.

On his website, Paul Free asks everyone to help, “even if all you can do is pray.” 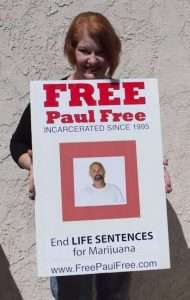 Paul loves to get cards and letters.  Write to him here:

Getting to Know Life for Pot Prisoner Paul Free

I asked Paul Free a series of questions to help everyone get to know him better, Here’s what he said:

What meal or food do you crave most that you will want to eat when you get out?
A roasted turkey with avocado sandwich on sourdough bread!

Coffee or tea?
Both.

What is your favorite sport?
Football! 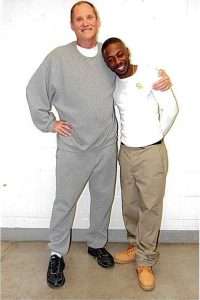 Favorite movie(s)?
King of Hearts, the original Exorcist, anything with Jack Nicholson.

Favorite song(s) and/or musical artist(s)?
Anything by Bob Dylan.

If you could walk out tomorrow and go anywhere – where would it be and why?
To the east coast of Baja Mexico, one of my favorite places int he world.

If you could travel to any country – where would it be and why?
See above question.

What do you most want people to understand about being incarcerated that you don’t think they understand?
That everything about it sucks!  Also that a majority of people in here are seriously mentally ill, as in they hold conversations with their chair and other inanimate objects or invisible people.  They belong in mental hospitals, not prisons.  You never know what is going to set one of them off or when it will happen so you always have to be on guard.